🤵 Infinite Blackjack Live in Australia - Where? 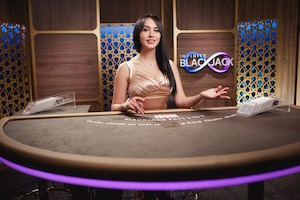 Prepare for a gaming zest with Infinite Blackjack, another of Evolution Gaming’s creation. It is no secret that Evolution’s games are popular among Australian casino players and we have a feeling that you will love this one.

Don’t worry about missing a seat on this table, as it allows an unlimited number of players. Streamed live from Riga studios, the game offers fine graphics, multi-player technology and seamless game flow, this is a must-try.

Infinite Blackjack was released late in 2018l, just after Evolution bagged several coveted EGR awards, that same year.  According to Evolution’s CPO, their goal when designing this game was to provide an action-packed game that allows as many players as possible.

Yes, other providers have some sort of similar type of game. However, the live blackjack games at Evolution surpass others by far, in terms of quality and popularity.