There has never been a better time to be an online pokies fan. It’s almost every single week that we’re introduced to new and innovative slot technologies infiltrating the industry with shiny new buttons, animations and different ways to win.

However, today we’re going to be talking about one of our favourite features adopted by countless online pokies on the market today, wild reels.

If you’re not familiar with the bonus feature, wild reels are pretty much exactly what you’d expect after hearing the name. A wild reel gives players the chance to turn a whole reel wild, rather than just a symbol, dramatically multiplying the chance for big real money pokie wins.

The way that wild reels work is often game-specific, although it’s common for players to find a maximum of 3 active wild reels available during any one spin. Some wild reels combine with multipliers or other features, ensuring gigantic wins and incredible excitement whereas others can form the basis of the bonus feature, acting as the highlight of the whole game.

Wild reels are one of our favourite features available to enjoy when playing online pokies, but not all games are created equally.

Thanks to an influx of providers all looking for a piece of the pie, it’s not uncommon to find subpar slots and disappointing games littering casino libraries. However, through plenty of hours of trial and error, we’ve compiled an unrivalled list of some of the very best games available today offering wild reels.

Below you’ll find everything from Yggdrasil’s Reel Desire to Nolimit City’s Barbarian Fury, there’s something for everyone in our best wild reel pokies collection. 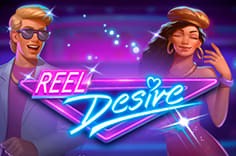 Released in February 2021, Reel Desire is one of the newest pokies available to play from Yggdrasil.

Reel Desire offers players the chance to relive (or experience for the first time) the golden era of disco, covering a ‘70s and ‘80s nightclub theme that’s lively and energetic. Neon bulbs light the way to the winning symbols including typical nightclub characters, Casio-inspired timepieces and those dreadful slotted sunglasses.

Players will find near-countless different ways to win with a total of 1,024 paylines available to build winning combinations across the reels. Combined with the fantastic bonus features available in Reel Desire translates to a huge maximum win of 20,480x the original wager.

There’s an average RTP value of 96%, around what we would expect for the funky nightclub slot. Volatility is rated high in the game and with such a large maximum win, it’s clear to see why – it’s a fantastic game that’s only complimented by those wild reels.

Secret Of The Stones (MAX) 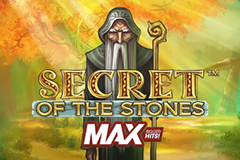 Powered by NetEnt and released in early 2020, Secret of the Stones (MAX) offers the sequel to the original with everything turned up to its maximum settings.

The theme of the pokie is loosely based around Stonehenge, the prehistoric monument in the South of England, and takes cues from the history surrounding the site. Symbols include plenty of stone figures ranging from snakes to wolves in this unique pokie.

There’s a total of 5 reels combining for a fixed number of just 25 paylines in the game, not the largest of numbers on the spec sheet. However, the NetEnt team know what they’re doing to add those levels of excitement and thanks to the wild reels offered in the game, there’s a giant maximum win of up to 25,000x the original wager placed, 10x the original game.

The RTP value of Secret of the Stones (MAX) is great too, sitting above average at 96.81%, a whole 0.6% up from the original version. The variance may just be the biggest difference between the two games and where the original saw a lowly volatile slot, the new version offers a high volatility game. 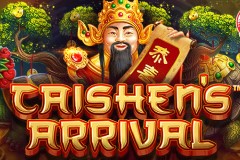 Betsoft’s 2019 release of Caishens Arrival was a fantastic step in the direction of the modern pokies that we know and love by the provider.

The theme focuses on the protagonist of the Chinese God of Wealth, Caishen (also known as Cai Boxing Jun) with an Asian influence present throughout the pokie. Symbols are exactly what you’d expect from a slot following Caishen with wealth, gold and jewels seen as the common denominator.

The 5-reel pokie has just 25 paylines available to players, but this is hugely overshadowed by the maximum payout available to players. Thanks to those wild reel bonuses, an enormous maximum win of 33,817x the original wager is up for grabs when spinning the reels!

The RTP of the game sits just slightly lower than the industry average for this type of pokie at 95.74%. Volatility is high, as you may expect with such a large maximum win and theme focused on wealth, so it’s no surprise that this is one pokie that’s perfect for high rollers and risk lovers.

Riders of the Storm (Thunderkick) 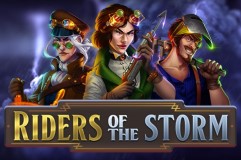 Released in late 2019 by Thunderkick, Riders of the Storm offers players a fantastic pokie with plenty of control over the reels.

The theme of the game is very much based around Steampunk with the “Riders of the Storm” identified as four unique characters, each offering a differing bonus. There’s the Mechanical Engineer, the Huntress, the Patriarch Captain and the mystery option all waiting for players to enjoy the game.

Riders of the Storm offers a fantastic 243 different paylines across the 5-reel pokie with a phenomenal maximum win of 26,426x the original wager. Players have the bonus rounds to thank for that with wild reels and walking wilds available when playing.

The RTP value sits around the industry average value of 96.14%, great for the game on offer. Volatility can be altered between low, medium and high, during play thanks to the variety of bonus features available in the game, also altering the RTP by very small amounts.

Released by ELK Studios back in 2017, Hidden gives players the chance to enjoy a thrilling pokie packed full of features.

The theme of this pokie is one that we’ve seen countless times before and covers an Ancient Egyptian approach to the reels. Players will find the reels based outside of Cairo, at the Great Pyramids with camels, sphinx and pyramids themselves featured as symbols across the reels.

There’s a total of 5 reels and a peculiar 178 different paylines available for players to build their winning combinations across. A maximum payout of just 2,150x the original wager is available to players in a single spin and those wild reels offer plenty of excitement during the game.

The RTP value found when playing the game is around the average that we’d expect, sitting at 96.3%. Volatility sits right around the middle ground with a medium rating, giving players of all bankroll sizes the chance to give Hidden a chance and see what all the hype is about. 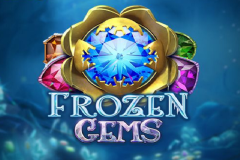 The theme is particularly icy, taking the title of the pokie literally. There are frosty traditional playing card symbols alongside some cold looking gems that players hope to land to make winning combinations.

There’s a phenomenal number of different ways to win with a total of 8748 different paylines available to payout to the player. There’s a huge number of features, including those wild reels, allowing players to claim payouts as large as 10,000x their original wager per spin.

RTP sits around the average that we would expect at 96.36% that’s combined with high volatility. It’s no secret that the game caters to those that enjoy the riskier pokies and with 10,000x the original wager up for grabs, the rewards are some of the best. 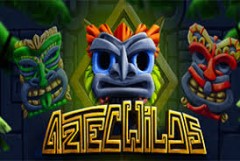 The theme is very much Aztec-based with a stone background featuring telltale inspiration points from the ancient Aztecs. Symbols range from the top playing cards with a fitting design to golden coins and wild masks that make the game look top-notch.

The game is played across a 5×4 area, giving a total of 20 different symbol locations and a whopping 1,024 different paylines to build winning combinations over. Expanding wilds, wild reels and countless free spins are offered at the game, allowing for maximum wins of up to 6,000x the original wager.

The RTP isn’t anything particularly special, sitting around the industry average of 96.2% for a game of this calibre. Volatility is medium in the game, allowing for a moderate amount of risk for players choosing to spin the reels, great for a range of bankroll sizes. 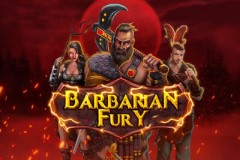 Nolimit City has been on a roll the last couple of years and their 2020 release of Barbarian Fury is another great game that only adds to their reputation.

The theme of the game is very much fantasy-based with a trip to the dark ages and a winter forest acting as the background for the game. Symbols range from shields featuring playing cards to wolf wilds and character symbols to complete the Barbarian theme.

There are just 25 paylines available in the 5-reel pokie, but don’t let that fool you, the game offers a plethora of features, ensuring that top excitement is available. A maximum payout of a huge 8,785x the original wager is up for grabs by the luckiest of players.

RTP sits around the average that we’d expect at 96.06%. Volatility is high in Barbarian Fury, catering to players with larger bankrolls who enjoy a risky pokie.