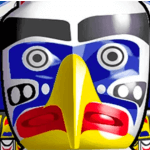 The game designers at Aristocrat drew inspiration from all aspects of life and culture for the Lightning Link series. For Magic Totem, in particular, they decided to apply a Native American design. A decent number of pokies have a similar theme, but it is usually the design that sets them apart.

When you load Magic Totem Lightning Link, you will pay a visit to a traditional Native American village on a serene evening where you will learn about totem poles.

Totems are poles, posts or pillars, carved with symbols or figures that relate to cultural beliefs, legends, notable events or they commemorate ancestors. The most common ones are those that represent nine different spirit animals that accompany people through life.

The thunderbird totem pole is what you will see on the reels of Magic Totem, and since the symbol is Wild hope that you see it more often than not. It will only appear on reels 2 through 5. Other icons appearing on the screen will be eagle, hut, tribe chief, buffalo and drum. Playing cards from 9 through Ace generate low-value payouts, as per usual.

The machine has 5 reels with 3 rows of symbols. If you are spinning for the regular denominations of between 1c and 10c per line, then you can choose to activate either 25 or 50 lines. Magic Totem is unavailable in high-limit pokie rooms, where you can play with 5 paylines with $1 and $2 denominations. Try other Lightning Link titles available in this range.

Magic Totem does not lack the core feature of all Lightning Link pokie machines – The Hold & Spin bonus. However, it does come with unique additions of its own. The Hold & Spin plays out in the already established manner. You have to collect 6 or more special symbols on a regular base game spin to activate the round.

For Magic Totem, the special symbol is the dreamcatcher. The number written on them will translate to the value of your prize. They can also have the names of the Mini, Minor or Major Jackpot, in which case your reward will also include the jackpot payout.

When Hold & Spin starts, the player has three attempts at collecting as many dreamcatchers as they can. Other symbols will not be in play. Add extra dreamcatchers to your total and you will reset the counter with 3 spins all over again.

The longer the feature lasts, the better you chances of filling all 15 sections on the screen with the bonus symbol, which would potentially result in hitting the progressive Grand Jackpot. Spectacular lightning effects appear whenever a prize is awarded.

In addition to Hold & Spin, Magic Totem offers 6 Free Games, as long as you can land 3 or more of the Native American tents on a single spin. During free rounds, any totem pole symbol that appears will expand and cover all positions on that reel.

Multiple Wild reels are possible and the win potential grows bigger with each extra Wild. If you manage to retrigger the feature with another set of 3 or more Scatters, the game will add 3 additional free spins (not 6).

Can you play Magic Totem Lightning Link online? No. Not yet anyway. But, that is not a reason for desperation. We searched far and wide for suitable online pokies available to Aussies that can bring a similar experience to Magic Totem.

Our search has been successful and we present the best alternative candidates below. Try them out, have fun! 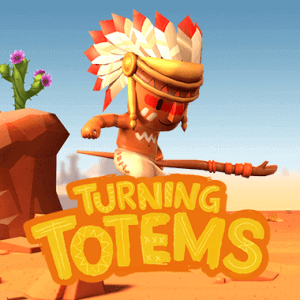 Players looking for a more modern approach to the Native American theme should check out Turning Totems by Thunderkick. It is a video slot machine with 5 reels and 11 fixed paylines with two-way wins (so, 22 ways to win technically).

The game features Thunder Reels, Sleeping Wilds, Thunder Snakes, respins and a bonus game. If we may say so, the developers got quite creative while developing Turning Totems. In this game, the Thunder Snake symbol turns the reel it lands on into a Thunder Reel.

It takes 3 Thunder Reels to activate a bonus game with 5 free spins. The artwork, the music, and the gameplay features make Turning Totems extremely enjoyable. The theoretical return to player is 96.1%. 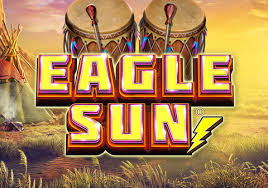 The background shows dusty deserts of the American West, whereas the reels are populated with drums, various members of a Native American tribe, eagles, dreamcatchers and landscapes.

Players who manage to trigger Free Spins get to double the game area and play with 80 active lines. It takes multiple Scatters (totem pole bird) to enter the Free Spins round and earn free rounds (7, 12 or 16 for 3, 4 or 5 Scatters).

One Super Eagle Spin will be triggered as a finisher, with additional Wilds.

It is also worth it to collect Eagle Sun symbols during the base game, because whenever one of them appears it will trigger respins. Eagle Sun has an RTP of 95.76% and 56,000x the stake maximum win. 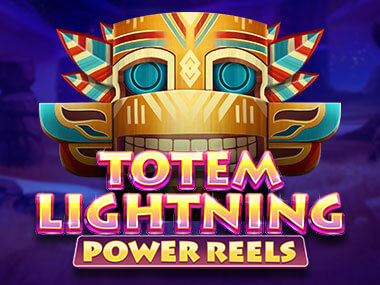 Totem Lightning Power Reels is a non-progressive online pokie made by Red Tiger Gaming in 2018. The title features 8 reels, 6 rows and 30 fixed paylines, which pay left to right. Low-value symbols are royals, whereas premium symbols are carved animal faces on the totem pole (crab, raccoon, panther and eagle).

The main feature in the game is Cascading Reels, combined with the Symbol Strike Bar. Winning symbols disappear from the screen, allowing new ones to take their place, but that’s not the end of it.

Low-value symbols that leave the reels are tracked on the Symbol Strike Bar and gradually removed entirely. That means only high-value icons will create winning combos.

Lightning Strikes can occur randomly, with two functions. One is to remove more low-end symbols from the reels and the other to clone symbols and enable winning combinations. 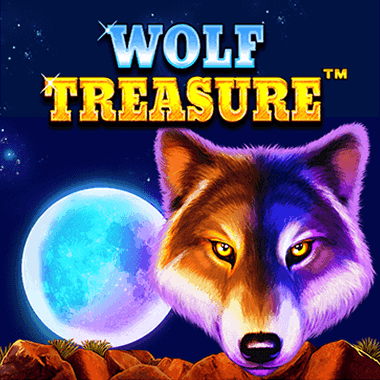 Wolf Treasure is set in the desert area of the American West. Various creatures appear on the reels, all hailing from the western plains. Wild horses, cougars, eagles and buffalo can easily be related to the spiritual values of Native American tribes, but there are also lucrative features to enjoy apart from the theme.

The IGTech release is a top choice for Aussie pokie players, and one of the reasons for that is the Money Respin feature. For this bonus to start, the player needs to land 6 Money symbols (which look a lot like the Moon, but alright).

The rewards from this round can take the form of the Mini, Major or Mega Jackpot, or a cash prize. Regular symbols fade away and over the course of 3 respins, the players accumulate more Money symbols to prolong the round with the counter restarting over and over. It’s basically the Lightning Link Hold & Spin mechanic.

The Free Spins feature is also a nice addition to the gameplay, offering 5 freebies with giant 3×3 symbols.