Aristocrat emerges successful once again with another Asian themed online pokie, this making the Chinese Mid-Autumn Festival its centrepiece. What Thanksgiving is for the westerners, that is the Moon Festival for many East Asian communities.

Also called the Mooncake Festival, this event traditionally falls on the 15th day of the eighth month in the Chinese lunar calendar.  After the Chinese New Year, it is the second most important festival in China. During the festivities, families reunite, they gather for dinner and light paper lanterns.

The mooncake is the must-eat food during the Mid-Autumn Festival and admiring the moon is one of the favourite activities during this festive time. Moon worship is what caused this tradition – over 3,000 years ago.

This lovely tradition served as inspiration for the developers to create a unique design for the Moon Festival pokie. The reels will display symbols such as a rabbit, a Chinese lettering symbol, a lotus flower, an instrument and a red lantern, as well as a geisha with flowers in her hair and a full moon.

These theme-related symbols will award higher payouts than “filler” icons borrowed from playing card decks – 9, 10, J, Q, K and A.  The maximum number of active lines in play is 50, but the players can set this number to 1, 5, 10, 20, 30, or 40. The lantern acts as the Scatter, whereas the full moon symbol will act as a replacement for any standard icon that is missing to complete a win. Overall, Moon Festival is a pleasing pokie to look at and play, although you shouldn’t expect any spectacular visuals.

Base game wins will get you so far, but the most this pokie can give is stored in the bonus features. Players can benefit from a Sticky Wilds feature and a Free Games round. That is about it. When 3 Scatters appear on the screen, the player wins 10 free rotations.

There is a possibility of winning 5 free spins more, if additional Scatters land below the Wild moon. Speaking of the moon symbol, when it hit during free games it will remain in position for the duration of the round.

Thanks to Wilds being constantly present on the board, it’s reasonable to expect boosted payouts.

There are no other special bonuses to keep up with, no progressive jackpots or picking games. Moon Festival is one of Aristocrats more basic pokies, aiming not to put any strain on the players.

If you are in the holiday mood and you enjoy Moon Festival, we have several online pokies to recommend. These titles are fitting alternatives to the Aristocrat game, and they have brilliant, contemporary graphics. Play a few spins below, for free or pick one of the recommended casinos for real money pokies play. 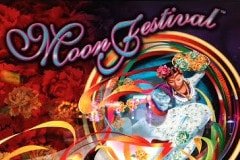 Moon Princess pokie from Play‘n GO isn’t as traditional in theme, but still honours the importance of the moon in Asian culture.

This game presents 3 powerful princesses that can transform their symbols – Love, Star and Storm.

In case you aren’t familiar, Moon Princess is inspired by the popular anime series Sailor Moon.

The graphics do it justice and you will see a bright shining crescent moon illuminating the board.

The pokie is played on a 5×5 grid, and the princesses will take turns to bless your gameplay with their unique powers.

Bonus features in this game include Princess Love, Princess Star and Princess Storm features, as well as the Trinity Princess feature.

You will enjoy free spins, multipliers and gorgeous animations coupled with high volatility.

Chinese New Year is a festive-themed pokie from EvoPLay with mesmerising graphics and an amazing soundtrack.

From the moment it loads, the game immerses you in the festivities, bursting with red and gold, showing a proper Chinese New Year’s party.

The game runs on 5 reels with 25 paying lines, fixed. One of the main features is the Multiplier Meter.

After each winning streak, the multiplier of Multiplier Meter doubles. By stacking wins, the player can reach a multiplier of up to 32 times the win.

The volatility goes from medium to high, as you go from Big Wins and Super Win to Mega Win and Epic Win.

The hit frequency is 50% and the pokie is available on both mobile and desktop.

Moon Dancer pokie from Ainsworth allows you to dance in the moonlight and celebrate.

This is a Chinese-themed online release that boasts authentic, beautiful visuals and lucrative features.

Symbols such as a geisha, lotus flowers, red lanterns and koi fish bring the theme together nicely.

The beautiful geisha is the Wild symbol, while a wheel represents the Scatter.

When you collect 3 or more Scatters, you get to spin the bonus wheel and collect from 8 to 18 freebies.

The pagoda symbols can also activate a bonus feature during which you spin the wheel for the jackpots and there are also Stacked Wilds with multipliers.

Moon Dancer is a solid title from the Sidney-based provider, so make sure not to miss it.

Harvest Fest is considered one of the best pokies in Booming Games’ portfolio ever since it was released in 2016.

The theme is closely related to the harvest season and how Chinese people celebrate the Mid-Autumn Festival in this period by lighting lanterns and eating mooncakes with their loved ones.

The key elements of the festival are represented by symbols such as the mooncake, a rabbit, a lion mask, paper lanterns, a couple in a loving embrace and a woman in traditional attire.

The backdrop is illuminated by moonlight, and everything looks more stylish because of the transparent reels.

Harvest Fest comes complete with features such as 2×2 and 3×3 symbols and Free Spins.

If you want to harvest the wins Harvest Fest offers, visit an Australian online casino powered by Booming Games software.