The Aristocrat Geisha pokie machine has been around for many years. It is an oldie but goodie that found its place under the stars at online casino platforms, too.

Geisha is, by all accounts, a fairly popular Aristocrat game with a Japanese theme. To this day, geishas fascinate people outside Japan as they are unique to the Land of the Rising Sun.

A geisha, or geiko, is a young woman that does performance art and trains to be a host, entertainer, singer and dancer.

This is a long-lasting tradition in Japan and geikos usually wear a long kimono, traditional hairstyles and oshiroi make-up. These “women of art” are considered as living national treasure in Japan and are often mistaken for courtesans by the western people.

A proper geisha appears on the reels of the Geisha pokie, representing the Wild symbol. She is joined by a pagoda, a dragon statue, a lotus flower, a fan, a bird and a mountain with cherry blossoms.

Two buttons facilitate setting the bet size and the values represent the bet per line. All that’s left is to hit the green Play button and the game begins.

The game has nice graphics and animations, although their simplicity and charm originate from an older generation of pokies.

🎰 The Core Functionality of Geisha Deconstructed

When you boot Geisha and take it for a few spins, you will see that the Wild symbol helps create winning combinations by replacing regular icons. This is not the only special functionality in the game.

Further bonus characteristics include the Temple Free Spins round and the Gamble feature.

The symbol of a temple set against the sunset acts as the free spins feature trigger. As long as you hit 3, 4 or 5 of them on the reels, you will benefit from 15 free spins.

All wins are tripled by way of a 3x multiplier during free games. There are more opportunities to enhance your winnings if you are willing to take more risk.

The Gamble button becomes active after every winning spin. By clicking on it, you will have a chance to guess the correct card colour or suit to either double or quadruple your payout. Failure to guessing correctly will forfeit your win.

Geisha is an enjoyable online pokie, but not the only one with a Japanese theme. If you find such themes and pokie machines soothing and fun, you should take a look at the titles presented below.

Created by trusted software vendors, games such as Geisha Wonders or Asian Beauty should give you the Oriental experience you are looking for. Either playing for free or staking real money. 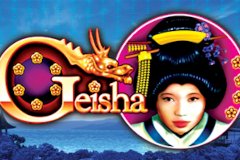 Wild symbols, multipliers, Scatter wins and a Free Spins feature make this game worth playing, for free or for real money. It is a fast-moving pokie that has serene-looking graphics.

The design is top-notch, as one would expect from Net Entertainment. You’ll encounter symbols such as a fan, a teapot, a bonsai tree, a koi fish and a lucky cat.

A geisha is a Scatter, whereas a jade Buddha is the Wild. You can play a maximum of 30 win lines in this game and choose among four different bet levels.

The Asian Beauty pokie online was released in 2011. The game offers 5 reels and 243 ways to win, as many other Microgaming pokies do.

The volatility here is low, but the gameplay and graphics quality is high as a cherry tree.

Four different Japanese ladies are the most lucrative symbols in this pokie, and there are also Wilds and Scatters.

The two main features are Free Spins and the Mirror Bonus.

Players can win 15, 20 or 25 free spins with all wins doubled during the round.

The Mirror Bonus is a random feature.

It can happen during any base game spin; mirrors will appear on a secondary screen and the player must pick until three of the same women symbols are matched for a multiplier prize.

Madame Ink from Play’n GO is not a pokie about geishas. Instead, it is a game about the art of tattoos with a strong Asian influence.

All the motifs you see on the reels are Oriental and Madame Ink’s studio is where the game takes place.

Madame Ink comes with an RTP of 96.21% and features such as the random Wild Ink feature and Madame’s Mystery feature.

The all-time favourite – the Free Spins round – is also on the menu awarding up to 12 free games with special modifiers.

The visuals in the Madame Ink pokie are superb and the overall design of the game is nothing less than appealing.

Visit the tattoo parlour and benefit from 243 ways to win.

Pearl Beauty is an online pokie with the all-ways-pay mechanic, developed by Playson. The game’s main highlight is the Hold and Win Bonus.

You can trigger it by landing 6 bonus symbols on the reels.

If you decide to take a voyage to the Far East, prepare to enjoy the popular Hold and Win mechanics and in-game jackpots.

The symbols on the screen include lotus flowers and koi fish, as well as two lovely young Asian women.

The volatility of Pearl Beauty is medium to high and the game comes complete with a return rate of 95.05%.

At the very least, you will experience pleasant gameplay. Chances are Asian beauties on the reels will enchant you to keep coming back.