In Dolphin Treasure, Aristocrat is taking us on an aquatic adventure across 5 reels and 3 rows of nicely designed symbols.

The classic Aristocrat art style is obvious, coupled with occasional animations and charming background music. Don’t expect to see mesmerising 3D visual effects as the graphics have roots in the land-based pokie Aristocrat produced way back in 1996.

The interesting thing about Dolphin Treasure is that dolphins do not show up on the reels. Instead, the developers included other sea creature in the paytable, such as tortoises, starfish, octopuses and sea horses, as well as the butterflyfish, which are common on the Great Barrier Reef.

The remaining symbols are an image of a sunset at sea and a treasure chest, as well as low-paying playing card icons from 9 to Ace.

Players are allowed to select the number of active lines from 1-20, and they can also select the bet value. Game controls and bet mechanics are simple while a variety of bonus rounds and special symbols add dynamics to the gameplay. Dolphin Treasure is a low-variance pokie, offering consistent smaller wins throughout your session.

Matching symbol combinations pay left to right and the payout value equals number of lines multiplied by the bet per line. The symbols that will help you the most in earning extra winnings are the treasure chest Scatter and the sunset Wild. Pay close attention to them each time you hit the Play button.

Dolphin Treasure is not a pokie you will have to study to understand its special features. The rules are simple to follow and the bonuses you are pursuing is the Free Spins round, coupled with an optional Gamble feature. The Wild sunset replaces all symbols except the treasure chest, delivering double payouts each time it completes a winning combo.

To activate free spins, players must get 3 or more Scatter symbols on the board. The reward is a set of 15 freebies and the round is open for potential reactivation. All winning combinations will bring payouts multiplied by 3 during the free spins bonus.

When you feel like gambling some more, try the Gamble feature. With a click of a button you can enter the gamble mini-game and try to guess the colour or suit of a random card to multiply your win by 2 or by 4. A wrong guess loses the entire payout, so it is best to make use of the gamble functionality for smaller wins.

There are plenty of maritime online pokies available, yet finding those similar to Dolphin Treasure was a bit of a challenge.

We wanted to present the top selections produced by high-quality providers.

Below, you will find a healthy list of recommendations you can refer to when you get an urge for an underwater adventure to play free or in real money mode. 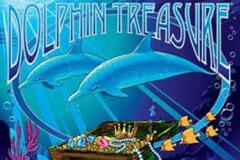 Golden dolphin Scatter unlocks the Dolphin Quest Bonus game. They must land on reels 2, 3 and 4.

You enter a mini-game during which you need to play a 3-reel slot machine to earn prizes. Stacked Wilds will also help boost your payouts.

The average long-term return stands at 96.12% for Dolphin Quest.

It is an entertaining game from a trusted industry vendor aimed to satisfy players who like aquatic slots.

Not too complicated, the Microgaming pokie is a swimming experience.

The title resembles the initial release, but upgrades on bonuses, animations and graphics.

The RTP for Dolphins Luck 2 slot machine is 95.83 % and can enjoy this game on various devices, no matter whether it’s desktop, tablet, or mobile.

This particular title has great music, so you will hardly ever want to leave the game due to such lovely ambience it creates.

The main features here are Wild substitutions and 10 free spins in the Free Spins round triggered by the dolphin Scatters.

The marine-themed machine includes a golden dolphin symbol that acts as both the Wild and the Scatter.

A regular blue dolphin will appear as an additional Wild and multiplier.

The game awards a plethora of free spins, but for that you have to collect a lot of dolphin symbols.

During the main spins, players can activate a Double-Up mini-game, which is the equivalent of the gamble functionality.

You will have to guess either the suit or the colour of a face-down card to double or quadruple your win.

Dolphin’s Island is an aquatic-themed online pokie from iSoftBet with 5 reels and 243 ways to win. The reels are set just above the ocean’s surface.

Fish can be seen swimming beneath and the marine fauna is depicted as cute with smiles on their faces.

The dolphin acts as a Wild symbol, replacing any icon on a winning payline except the Bonus symbol.

This bonus can award 15 Extra Spins with Random Wilds, Wild Reels or Block of Wilds.

An RTP of 96.56% makes Dolphin’s Island pokie even more attractive.

If you’re the type of person who likes to enjoy a seaside vacation, making friends with ocean creatures while searching for treasures, Dolphin’s Island is the game for you.