Aristocrat, although an Australian developer, is no stranger to Asian themes. Several of its hit titles have an oriental feel, as well as recognizable Asian visuals.

Choy Sun Doa belongs to this genre, as well. It is a nice-looking online pokie that focuses on Chinese mythology. The title translates to “God of Wealth” and you will encounter plenty of China-related items on its reels.

There are several Chinese gods of wealth, but we believe it is Caishen that is honoured in the game. Caishen has the ability to bestow good fortune and wealth to anyone he desires.

While some traditions have been abandoned over time, many people still worship the God of Wealth in the morning, by offering incense and hoping to invite his blessings into their homes. In feng shui, Caishen (or Tsai Shen) is often used to promote prosperity.

Choy Sun Doa has an unconventional mechanism called Reel Power which requires you to activate reels rather than paying lines. Depending on how many positions you choose to play, the game will provide between 3 and 243 ways to win. Matching symbols pay out when situated in adjacent reels.

Wild substitutions are rather standard. Choy Sun Doa takes care of those, appearing on reels 2, 3 and 4 only. The gold ingot yangbao is the game’s Scatter icon and if you obtain three of them on a single spin, the Free Spins mode will start.

You will need to choose among 5 different rounds:

If the red envelopes symbol appears on the 1st and 5th reels during the bonus game, you will receive an additional bonus prize worth up to 50x your stake.

This is an instant win prize, so the game will simply add it to your balance. Furthermore, if you manage to retrigger the bonus, you will be able to choose your round stats once again.

There are multiple things that make Choy Sun Doa Slot quite special. However, if you want to see the Chinese deities smile upon you when they play other fun pokies from trusted providers, we have suggestions prepared for you.

Try these magnificent games that are bound to provide you good fortune in real money mode. Playing them for free will bring you first-rate entertainment, so it’s a win-win situation. 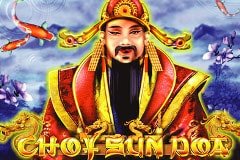 Lucky Little Gods Slot is an online pokie developed by Microgaming, launched in 2018. The game is played across 5 reels and 243 paylines with a 96.75% RTP. It is non-progressive slot machine with adorable cartoony graphics.

Several deities appear on screen, celebrating the Chinese New Year. A Chinese-inspired soundtrack will run in the background for the entire duration of the gameplay.

Lucky Little Gods pokie bonus features are Golden Tree Bonus and Little God Bonus, as well as a Free Spins round. Collect Treasure Pot Scatters on reel 3 to win between 20x and 100x the stake.

The Golden Tree Scatter symbols will award between 1x and 15x the initial stake and the free plays mode will give you 8 free games with stacked Wilds.

Temple of Wealth is a Play’n GO pokie with a strong traditional vibe. It comes with a progressive jackpot and appealing features.

You’ll be playing on 5 reels and 3 rows, 243 ways to win, hoping to land Wild symbols or Scatter to improve you wins.

Symbols on the reels include ancient Chinese lucky coins, gold ingots, gold fish, Fu babies and the smiling god of prosperity and wealth. The 5-reel, 243 win-ways board is placed inside the temple.

At any point during the base game, 1 to 5 reels may randomly become Gold Reels. If a Wild symbol lands on a Gold Reel, the progressive jackpot feature is triggered.

The game guarantees one of the four jackpots to be awarded. The Free Spins feature offers 6 different combinations of freebies and mystery symbols.

God of Wealth is a 5-reel, 20-payline online pokie made by Red Tiger Gaming. It benefits from a Random Wilds feature, as well as from a Scrolls Bonus feature.

Great visuals and a soothing oriental soundtrack make God of Wealth very appealing. If you’re all about stats, know that the game features an RTP of 96.25%.

The God of Wealth himself is the Scatter symbol. Landing 3 of those will trigger a random number of free spins.

The animated God of Wealth determines the precise number of spins. A stacked Wild in the 3×3 formation can appear during free spins.

Happy Riches is fun to play through as you will encounter symbols such as koi fish, lanterns, jade amulets and Maneki-Nekos waving at you.

All winning combinations formed during free spins will have a 3x multiplier applied.

Happy Riches has a solid RTP rate of 96.32% and a medium to high volatility.