Despite being an Australian company, Aristocrat likes to make online pokie machines with Asian themes. After 5 Dragons, now we have 50 Dragons.

You can never have enough dragons, as they say! In Chinese tradition, and Asia in general, the dragon is very important.

They are symbols of power, grandeur and prestige. In specific situations, they represented the emperors throughout Chinese history.

Most of the time, on the mention of dragons, people think of an image of a beast, a winged creature with horns, breathing fire and whatnot.

Dragons of East Asian legends are more stylish. Their bodies have a more serpentine-like shape and they aren’t normally represented as vicious as in western culture. Oriental dragons have powers to breathe clouds, move the seasons, and control the waters of the Earth.

These motifs all fit nicely on the reels of 50 Dragons, one of the most popular Aristocrat pokies. The game uses 5 reels and 50 paylines.

A deep red background rests behind the reels, which are populated by icons such as gold ingots, gold koi fish, gold tigers, phoenixes and golden dragon masks.  When dragons help form a winning combination, they will come to life in a lovely animated sequence.

The Wild symbols only show up on reels 2, 3, 4 and 5. They can replace any symbol except for the Scatter. Beautiful white pearls are Wilds, whereas the ingots are Scatters.

The remaining low-value symbols in the game are drawn from the traditional playing card icons from 9 to Ace.

By using the + and – buttons players can adjust the number of active lines and their bet size. Max Bet is a nice shortcut to increasing the stakes to their maximum value.

🎰 The Core Functionality of 50 Dragons Deconstructed

What are the main highlights of the 50 Dragons pokie? The special features from Aristocrat can be conventional, but also quite creative on occasions. For this particular game, the developers went for a wholesome Free Spins round triggered by 3 Scatters on a single spin. The ingots appear on reels 1, 2 and 3, so you need to line them up correctly to activate the feature.

The reward is a set of 10 free rotations, with the possibility of retriggering the round. If you manage to activate the feature again, you will get half the spins, without the chance of repeating the retrigger. Wild pearls and dragon symbols give out bigger payouts during free play.

As an ultimate treat, players can benefit from the Gamble special feature. Any winning spin in the base game activates the feature, yet the player decides whether to take it or not. If you predict the correct card colour of a face-down card, you double your earnings.

You can also gamble on suits and quadruple your prize, but a wrong prediction causes you to lose it all.

Asian-themed pokies and pokies about dragons in general are not rare in the online casino world.

So, we had quite an assignment trying to find the best alternatives for 50 Dragons available to Australian players.

We are posting four suggestions below, so make sure you check them out.

Playing for real money is not obligatory – you can have fun by trying them out in free demo mode. 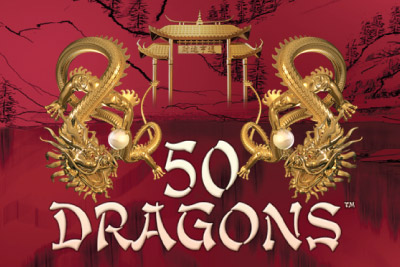 Dragon Match Megaways comes from one of the leading online and mobile casino content providers, iSoftBet.

The game is set in a Chinese temple, where players need to show their skill and ability to attract good luck and form full dragons on the top tracker reel.

The Dragon Match Megaways pokie takes a fresh look at old conventions, mixing Asian visuals with innovative game engine qualities. The 4 reels in the standard game setup can hold between 2 and 7 symbols each and produce up to 3,136 winways.

Players can get a kick out of the Dragon Match feature and the Free Spins feature.

During free play, you need to choose your combination of freebies and multipliers or perhaps go for the Mystery choice and let randomness decide.

Reel Keeper is a pokie for online casinos developed by Red Tiger. Compared to our other suggestions, this one has a more fantasy dragon theme, than an Asian one.

Hey, we are worshipping dragons left and right.

The game as a classic setup of 5 reels by 3 rows, delivering 10 paying lines.

The variance goes from medium to high, so make sure you have a decent bankroll before you roll the reels.

The graphics are polished they are nearly sparkling.

One of the most enjoyable things about Reel Keeper pokie is the feature where Dragon Wilds are added on the rightmost reel by dragons flying above the reel set.

Beast of Wealth is one of three games in Play’n GO’s series about wealth, riches and all those things dreams are made of.

The beast from the title is the mighty dragon that appears as the highest paytable symbol.

The Free Spins gives you five options to choose from. Each will add additional symbols to the reels of the chosen icon (one is a Mystery choice option, awarding 88-118 of any symbol).

No matter the combination, 8 free spins are played. Additionally, players can enjoy Gold Reels and a jackpot feature.

You need to make picks from the 12 coins shown, to get three matching ones for a progressive jackpot prize.

The game offers the Mini, Minor, Major and the Grand Jackpot. A small portion of bets of 1.5% is set aside for the jackpots.

Ainsworth is another valuable source of Asian-themed pokies, one of them being Grand Dragon. It is a 5-reel, 25-payline pokie machine which looks and sounds majestic.

The Ying Yang symbol acts as the Scatter, the key to unlocking the free spins bonus. You must hit 3 of these symbols on reels 2, 3 and 4 to activate 10 free spins.

In this feature, reels 1 and 5 will be full of Expanding Wilds with the re-spin activating on the middle reel. All in all, a very entertaining game with a strong Chinese thematic.