Casinos and Pokies in Melbourne 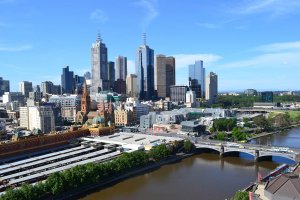 Melbourne sits on the coast of Eastern Australia within the state of Victoria, and is a popular destination for tourists both from abroad and within Australia itself.

It is full of art galleries, pubs, clubs and sporting arenas, and also offers lots of local wildlife and countryside as it sits on the Yarra River which is a huge draw for people looking for an all-round location to enjoy themselves.

The use and regulation of pokies in Melbourne is quite strict and there are various capping amounts to ensure that betting remains safe and fun instead of getting people into debt or causing social and financial issues.

Apart from the main casino in the city there are around 700 pokies machines and the amount spent on average in the years 2018-2019 was fairly moderate at about $500.

In figures, the amount of money slotted into pokies per day in the city topped $230k, which equates to $84.5m per annum. For every 1000 adults in the city, there is approximately 4.3 pokies machines, but we also know that online pokies and online casinos in Melbourne have also grown in popularity, especially during 2020 when many residents have been under strict lockdown, forcing them online to have a quick bet.

The legislation around land-based casinos and online pokies is governed by the Gambling Regulation Act which came into force in 2003 in the state of Victoria, which runs alongside the national act of 2001 which protects punters by ensuring that payouts are always made responsible and in a fair manner.

There is only one major casino in Melbourne that has a monopoly over the gambling in the city – The Crown Casino. It has lots of table games on offer such as Craps, Baccarat, Blackjack, Pai Gow and Roulette. There are also some variations of these games to keep the excitement levels high such as Crown Pontoon, the Rapid version Baccarat and the Vegas Star variant of Roulette.

Poker is also played here in a myriad of forms, from the traditional game to styles such as Caribbean Stud and Mississippi Stud, as well as the more popular Poker War, three-card and Texas Hold’em. This casino also hosts events in poker such as the World Series and the popular Aussie Millions.

Whilst there is less choice of pokies in land-based casinos than those found in online casinos offering a variety of online pokies in Australia, you can still enjoy over 3500 machines within the casino – a huge amount to ensure you’ll never get bored. What’s more, there are some of the many names found in online pokies such as WMS Gaming and IGT, with bets costing as little as one cent.

There’s always something to do in this casino, and if you tire of a day rolling the dice or playing cards then you can relax in the games arcade, bowling alley or even the large ballroom with decorated ceiling. There are also six eateries within the Crown complex including the world-renowned Nobu and British chef Heston Blumenthal. Shopping in the area includes the likes of Burberry and Louis Vuitton.

After a day of gaming, choose from three different hotels, many with luxury accommodation and views over the river. The Metropol is the biggest hotel in the whole of Victoria, with over 650 rooms to choose from across 28 floors.

Aside from the large Crown Casino, you will find pokies lounges all over Melbourne and the outlying areas, and most of these are contained within a sports bar or hotel, but there are some specialist places where you can hit the slots. Check out our top picks.

Located right in the heart of the city, this hotel has a full complement of tasty meals and café foods such as sandwiches and paninis in addition to an impressive range of international beers, cocktails and wines.

There are five large screen TVs dotted around always airing the latest sports events, a kiosk for placing bets with TAB, and of course a lot of pokies to keep you entertained for hours.

A traditional hotel in a great location within the city, you can not only enjoy a decent meal out in nearby restaurants, but downstairs there is a large and spacious room dedicated to pokies of all sorts.

Just like online pokies, you can choose your betting denomination and game the night away with the bar just steps away to keep you well-watered.

The first ever Irish club in Australia, this bar gives a big shout out to its Irish heritage and culture and regularly holds cultural events such as Celtic group singing and other live music from Irish talent.

There are multiple bars open to serve customers, large screen TVs and of course a host of pokies with varying themes for amusement on a night out with friends.

If you’re looking for somewhere dedicated to sports betting and pokies alongside free-flowing beers, then the Golden Nugget should always be a port of call.

A modern TAB facility has been set up, and you have a choice of Keno, EBT and Trackside as well as huge television screens with channels airing from America like ESPN, Fox Sports and EPL.

A classy place filled to the brim with all kinds of pokies, this is the place where people head to when all the other bars and pubs close their doors – because it’s open until 5am every day.

You have your traditional big screen televisions which have all the latest sporting events on from around the world, as well as food and beer on demand at all hours.

Pokies are in abundance at the Shangai Club Pokies which is located in China Town.

You are truly spoiled for choice here with many machines to play on, some with progressive jackpots and all able to be played with a range of denomination bets starting from just one cent.

The place is highly popular with locals thanks to the amount of pokies on offer, but it’s also one of the cheapest places for draught beer in the whole city.