Casinos and Pokies in Cairns 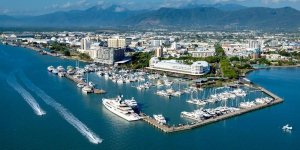 Ideally situated in the tropical north of Australia in the territory of Queensland, the city of Cairns receives thousands of tourists annually as well as residents from the country looking to take in the more natural aspects of Australia.

The area offers some of the most beautiful beaches with white sands, as well as being on the doorstep of the rainforest and of course the ever-popular Great Barrier Reef. But it’s not all about nature, and the city is a popular place to enjoy some of Australia’s finest gambling.

When it comes to the statistics of casino and pokie playing in Cairns, the area is not as well-built as places like Brisbane and Sydney, and it also has a lower population – however, there is no shortage of people here who love to spin the reels or roll the dice.

Around 59% of Queenslanders play the lottery and buy scratch cards, but only 25% of the population plays on pokies per year – land-based, not online pokies in online casinos in Australia. 18% of residents like to bet on horses and greyhounds, but only 15% play Keno – numbers which seem small still but have risen a lot in past years.

Just under 10% of people in the area play casino table games like blackjack and roulette, possible due to the lack of available places aside from the main casinos in the state. Most gamers who enjoy pokies are in the medium-earning bracket from around $45-70k, so the money spent is mostly disposable income and not causing serious gambling addiction as can be seen in other states of Australia.

People tend to play pokies recreationally in this state, with 77% of residents using pokies between 1-6 times per annum.

There are lots of places to play pokies in Cairns, not just in the main casino, but also in smaller bars, restaurants, RSL clubs, sporting clubs and hotels. Of course, you can always join an online casino and discover the thousands of online pokies available to play via the internet.

The main casino in Cairns is the Pullman Reef Hotel Casino which has been open since 1996 and is jointly owned by two entertainment companies. In the plush hotel which is situated right on the beachfront, there are a number of table games to take advantage of including Roulette, Rapid Roulette, the midi and mini versions of Baccarat, Money Wheel, Blackjack, Texas Hold’em style poker and Sic-Bo.

The table games are situated on a large casino floor which is quite impressive and gives easy access from multiple parts of the complex.

Unlike the wide choice of online pokies, for a land-based casino Pullman Reef has a selection of 500 gaming machines which will keep punters busy with denominations ranging from one dollar to one cent, so you can actually get 100 bets with a single dollar to make your money stretch further.

For sports fans there is a TAB facility for bets on everything from horse racing and football to rugby and boxing, and the casino also benefits from a Keno section. If you love to watch your sports on a big screen, then a dedicated cinema-style area can be found in the main arena – perfect for meeting up with friends for a few cold beers on a special fight night or World Cup game.

As an all inclusive resort, you’ll find restaurants offering fine Australian wine and local produce, as well as Chinese and Asian style eateries for a flavour punch in between gambling. If you’re into live music with cocktails, then Bar36 has everything you could want, with a different entertainer every night. The resort is also perfect for children as it has a theatre on site, as well as a wildlife dome on the roof where you can enjoy the local flora and fauna including tropical trees and parrots flying free.

The hotel in the premises is highly rated and has been given five stars for its range of sumptuous suites. Choose from Superior, Deluxe or Junior suite accommodation with views out to sea or across the blue swimming pool with palm trees.

Cairns has a couple of places outside the Reef Casino where you’ll be able to play pokies for real money.

An iconic location in the city of Cairns, this place has been open since 1992 offering not only a hotel but a restaurant and bar too.

The pub is quite laid back but there is a high level of customer satisfaction thanks to great quality food and drinks.

It is a family location and very community oriented, however you will be able to bet on the horses here or spin the reels from a decent selection of pokies.

An ultimate location for all kinds of sports betting and pokies machines, this facility provides everything from games of poker, to hosting frequent Keno and Bingo games, to having a dedicated TAB kiosk.

Live music is also a feature, and as the pokies are in the same room you can really have a good time without having to move to a separate area.

Multiple denominations accepted for pokies from one, two, five and ten cents up to a dollar.

Open daily from 7am onwards, there is a great selection of 48 pokies on offer here, and not just the basics either – you’ll find some awesome progressive games meaning you could win hundreds or thousands of dollars from the pokies.

Not content with just offering a wide selection of pokies, here you can also play Keno or bet with TAB, as well as enjoying drinks galore at the dedicated sports bar.

Largely known for its choice of delicious food offerings, this spacious establishment can cater for a large number of people thanks to both indoor dining as well as a beer garden.

If it’s pokies you’re in the mood for, then choose from 45 machines in the specialist games room, or you can enjoy a game of the much-loved Keno.

Open until 3am every day, you can watch international games of sport from huge televisions in the sports bar.

A huge social club located in Westcourt, Cazayls is a one-of-a-kind location in the city which houses a ton of quality pokies, 280 in total and it’s open until 2am most days.

There is a sports bar to catch up with everything from the world of sports – on a 4m wide screen no less – and you can also take advantage of a TAB kiosk as well as Keno and Bingo.

What’s great about this venue is that you can sign up for the loyalty card and get points for every pokie machine you play on – giving discounts on food and drink.