Casinos and Pokies in Brisbane 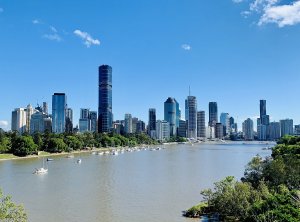 Brisbane is one of the most up and coming cities in Australia, with lots of jobs on offer and growing business sectors, plus the Great Barrier Reef, rainforests, islands and theme parks all within the Queensland district. However it is the volume of visitors to this sunny city – 22 million annually to the state – that has fuelled the demand for a large gambling industry.

There is already one large casino complex named The Treasury, but another larger more central casino hub will start to be built in 2021 that is set to eclipse it as the biggest leisure complex in Brisbane.

Apart from the hundreds of pokies available at The Treasury, there are over 8000 more machines within the city spread over 200 various clubs, bars, hotels, sports centres and league clubs.

Of course, with the rise in online gaming there are thousands of online pokies available to play in Queensland from your phone or computer.

All of these machines and venues are regulated by the 1991 Act on Gaming Machines. Queensland has a population of around 2.2m residents, and around $4bn is spent every year on gambling related activities, much of that being spent within the city of Brisbane itself.

The average spent per person is over $1000, with around 58% of that spend going on pokies, with another 18% for casino related table games. This does not include money spent in online casinos in Australia with a selection of online pokies and online casino games.

Lotto and betting wagers on races such as horses and greyhounds account for 9% each, and Keno brings in only 3% in the state, lower than the 15% national average for the popular game.

One of the largest casinos in Brisbane is The Treasury, a beautiful building with old-world style and class that is open 24 hours a day, with live entertainment to keep everyone entertained. There is a varied game selection here, and table games include Caribbean Stud and Three-Card Poker as well as Texas Hold’em. Up to par with any other brick & mortar casinos in Australia.

The classic games such as Roulette can be found in abundance on the main gaming floor as well as in specialist VIP rooms, in addition to The Wheel – an exciting spinning game with big cash prizes – and Treasury 21, a variation of Blackjack, and the Challenge version is also available to play.

There are some dice games too if you like the thrill of the roll, and you can have a game of Sic-Bo or Craps in pleasant surroundings. Baccarat can be played at The Treasury and you can even choose to play the Dragon version, where your bet will win if more than 4 points are in the hand that wins.

If pokies are your thing, then there are more than 1400 machines to play on, many of the same ones you’ll love if you play online pokies – Golden Dollars, Dragon Link and Lightning Link to name just a few.

Thanks to the fact the casino is so large and sprawling, there are many restaurants and bars to choose from as well as a hotel. The Black Hide is the most popular eatery, but you can choose Chinese and Asian food from places like Mei Wei and Fat Noodle.

The Lab is somewhere you can eat all day round, from breakfast to dinner at a reasonable price, or you can choose to upgrade your eating experience to Kitchen at Treasury which is famed for local produce and large well-lit space.

Whilst the bulk of pokies are found in the main casino in Brisbane, there are a vast amount of Leagues Clubs and other sporting venues that house hundreds of pokies – all dotted around the outskirts of Brisbane.

Within the city you can pop into just about any local sports bar or tavern and you are guaranteed to find pokies to your liking there – they’re really popular in Queensland.

Check out our top picks for places to play the pokies in Brisbane:

45 pokies are available to play here in this newly refurbished location with dedicated gaming area. You can choose from Player’s Paradise, Money Train, Jackpot Carnival as well as Dragon Link.

There is a free coffee selection, and a specialist snack bar for popcorn and other savoury bites while you play.

There’s also a small restaurant when you’re in need of something more filling.

You can enjoy fine bistro dining here with a wide selection of locally produced meal selections, as well as a full bar offering beers, wines, spirits, mixers and cocktails.

Not only are there a handful of pokies machines to choose from, but you can also try your hand at Keno or bet on one of the many racing or sports events with the onsite TAB facility.

A traditional pub with an Irish theme, you will find an authentic experience here thanks to the British wood and brass bar as well as wooden cabinets and a range of Irish memorabilia dotted around the place.

It is the biggest Irish venue in the city, and offers a central CBD positioning so that city workers can flock here after work to enjoy some fine pokies action from one of the many machines on site.

A welcoming atmosphere awaits you here, with function rooms and an exclusive bistro serving up some fine food experiences.

It is family friendly in the main section, but you can step through into the gaming zone where you will find a well-stocked bar and a range of pokies to cater for all tastes and budgets.

A modern venue that serves the local community, Zillmere Sports Bar is fully equipped with multiple television screens airing all the best local, national and international sporting events – all with the bonus of having food and ice cold beverages on site too.

A true sports bar, you will find Fox Sports, Keno bets and a huge choice of 74 pokies.