Casinos and Pokies in Adelaide 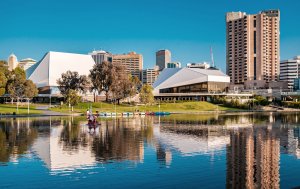 The South Australian city of Adelaide is one of the gaming capitals of the country, with the state as a whole having over 13,000 licences for pokies of all varieties, and 1000 of these are actually from the singular large casino that keeps residents entertained.

The number of people playing online pokies in this state has also risen in the past five years. The state has a population of around 1.7m, so the density of pokies to people sits at 1 for every 130, or 0.007. There are no online casinos or online pokies which operate out of this state, however all land-based casinos are heavily regulated.

In total, gambling in the state of South Australia brings in hundreds of millions of dollars every year, to the tune of $680m in 2019, and the average person will spend around $500 annually on gambling pursuits which include casino based activities and pokies, as well as sports betting.

Even though Adelaide is a large city, it actually comes in second to Port Augusta when it comes to the number of pokies, and is even behind Norwood Payneham in terms of expenditure, as they spend a whopping $970 per person every year.

To give an idea of the amount of money spent in pokies every month, not including online pokies from online casinos in Australia, in the month of February 2020 $54m in total was bet. The large sums of money in this area have caused concern for some in the state, with many arguing that pokies should be reduced in number, but on the other hand they contribute a large amount to the economy of the state, and the country as whole. 3000 machines were said to be removed from bars and clubs in South Australia because of a bill passed, however it is highly likely not all of them were taken out of circulation.

There is one major casino that dominates Adelaide in both size and scale, the Sky City casino. Not only does it have a wide selection of electronic gaming machines and pokies, but you will also be spoiled for choice when it comes to the table games on offer.

You can enjoy a game of Roulette or is fast-paced version of Vegas Star, Blackjack and Baccarat and Rapid Baccarat, plus poker variations such as Caribbean Stud and Texas Hold’em. It’s a known fact that Adelaide brought the game of Texas Hold’em to Australia over two decades ago, and you will also find player vs player games of poker held at this location for big cash prizes.

The complex also features a spa area with indoor and outdoor pools, saunas and a steam room, in addition to massage therapies. You’ll also be treated to a choice of two bars which have some of the most extensive ranges of spirits and mixers in town, as well as signature cocktails and imported beers.

When it comes to filling your stomach after a fun day of gaming, then head to favourite restaurants like The District which offers Australian classics such as burgers and ribs, or choose an oriental theme with Madame Hanoi or Lucky Noodle. If you’re all dressed up to have an elegant meal, then Italian restaurant iTL or Sean’s Kitchen specialising in local produce of seafood is sure to wow you and your partner.

Whilst a large bulk of the pokies are found in the main city casino, there are thousands more scattered across the state and in the city suburbs in pubs and clubs.

Some of the best areas include the Eastern and Southern suburbs, however you will also find a great choice in places like Golden Grove and West Lakes. Take a look at our top selection to keep you spinning those reels in Adelaide.

In the West End of the city located on Hindley Street, this tavern is open through the wee hours until early in the morning and has a dedicated games room filled with 34 of the latest and greatest pokies – all in a friendly atmosphere with beer on tap.

It’s a great place through the day too with barista coffee and a wide selection of bar snacks and pastries.

A dining club offering a selection of high-end meals in addition to the usual pub grub, this place is a great meet up spot for friends when the sun goes down.

Not only is there a nightclub feel on the site with a live DJ, but there is a dedicated games room featuring 32 pokies to choose from, and what’s more you can sign up to the rewards club to get discounts around the establishment.

Find out more at http://thelondontavern.com.au/

A hotel and sports bar that is open around the clock, you won’t be disappointed here when it comes to the amount of gaming activities on offer.

There are six huge screen TVs and over 40 smaller ones so you can always find exactly what you want to watch from the world of sports.

There are pokies galore, in addition to TAB, Keno, sports betting and lotto to entertain even the fussiest of punters. Food and drink are also available on the premises.

Find out more at https://goo.gl/maps/kVadCndGGSGEaCrt7

Sports and pokies are the mainstay of this popular location. The lounge for gaming on pokies is open every day of the week and has 40 pokies machines to choose from.

There is a restaurant onsite serving up classics like burgers and ribs, and a dedicated sports bar with all national and international sporting events being displayed. Perfect for a fun time with the boys for a few beers.

Find out more at http://www.mcqueenstavern.com.au/

Pulteney Pokies, as the name suggests, is a place dedicated to pokies, and you’ll find a great selection in the gaming rooms, with some 33 machines with a range of betting amounts. You can even choose to place a wager on the TAB.

There is a lounge and bar zone where you can catch up with friends over some drinks, or order some delicious food from the menu. There is also a bottle shop where you can find a range of wines, spirits and beers, both local and international.